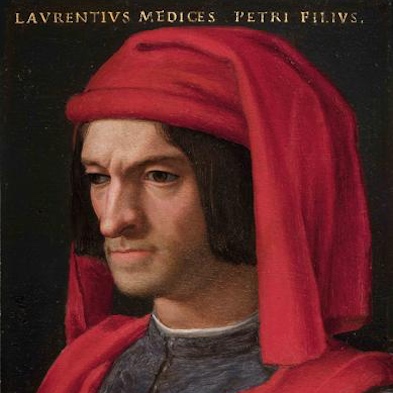 Lorenzo de Medici was born on January 1, 1449 in Florence, Italy. “Lorenzo The Magnificent,” as he was called by the people of Florence, was a statesman, ruler, and patron of the arts. “The Magnificent” was a common title of respect in Italy at the time, but it was Lorenzo who raised it to special status. He ruled Florence with his younger brother, Giuliano, from 1469 to 1478. After his brother’s assassination in 1478, he was sole ruler until his death. Perhaps Lorenzo’s greatest contribution to history was his patronage of the arts. He contributed more than anyone to the flowering of Florentine genius in the late 15th century, supporting such giants as Leonardo da Vinci and Michelangelo. He treated the artists under his protection with respect and warm-hearted familiarity.

In 1485, Girolamo Savonarola, a Dominican friar from the convent of San Marco began to harangue the Florentines with prophetic language of the Apocalypse, first from the pulpit of San Marco and then from the cathedral in Florence. Although it had been Lorenzo who brought Savonarola back from exile in Bologna, the friar soon accused his benefactor of ruining the state and squandering the wealth of the people. These accusations began to undermine Lorenzo’s support among the people of Florence.

In 1492, he fell seriously ill. He knew that he was dying. Fearing eternal damnation, Lorenzo called Savonarola to his deathbed seeking redemption. Accounts of their final meeting differ. Some scholars speculate that in the end Savonarola remembered his duty as a priest, giving Lorenzo absolution for his sins. Others content that Savonarola’s judgement was harsh, that he damned Lorenzo.

He died during the night of April 8 and 9, 1492 in the Villa of Careggi at the age of 43. He died at the dawn of a “the age of exploration.” Christopher Columbus would reach the “New World” only six months later. Florentines were so moved by Lorenzo’s premature death that the entire population attended his funeral.