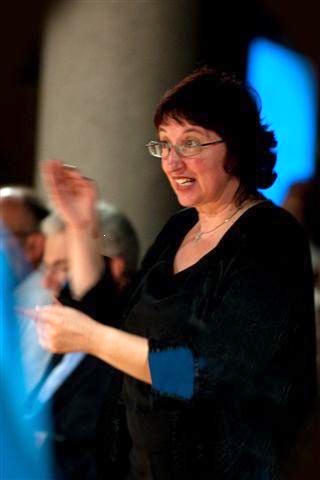 THEODORA PAVLOVITCH is a Professor in choral conducting and Head of Conducting Department at the Bulgarian National Academy of Music. She is also a lecturer at Sofia University. Her artistic career started in 1986 when she worked as choir-master of the Bulgarian National TV-choir contributing to many TV-programs, live concerts and recordings. In 1991 she became conductor of the Sofia Chamber Choir called upon her teacher Prof. Vassil Arnaoudov. With this choir she won prestigious awards at international competitions, took part in many high-level international festivals, in TV and radio-programs, concert tours in 22 countries. Since 2005 Theodora Pavlovitch is a permanent conductor of Classic FM Radio Mixed Choir performing different styles of music in a collaboration with Classic FM Radio Orchestra. In 2007/2008 she conducted the World Youth Choir, honoured by UNESCO with the title Artist for Peace, recognizing the WYC’s success as a platform for intercultural dialogue through music. Prof. Theodora Pavlovitch is frequently invited as a member of Jury-panels at a number of international choral competitions, as a conductor and a lecturer at prestigious international events in 25 European countries and Russia,USA, Japan , China, Hong Kong, Taiwan, South Korea, Israel. In 2005 she led a Master class for choral conductors in the program of the 7th World Symposium on Choral Music in Kyoto, Japan.
For her artistic achievements, Prof. Theodora Pavlovitch has been awarded:
– Golden Century – a special Prize given by the Ministry of Culture of Republic Bulgaria (2016);
– Prize “The Hearth of Sofia” given by the Sofia Municipality and the
Bulgarian Ministry of Education and Science (2016);
– Golden Lyre given by the professional Union of Bulgarian Musicians ( 2012);
– Golden Book of the Council of the European Scientific and Cultural
societies (2012);
– Special Prizes of the Bulgarian Choir’s Union and Classic FM Radio.